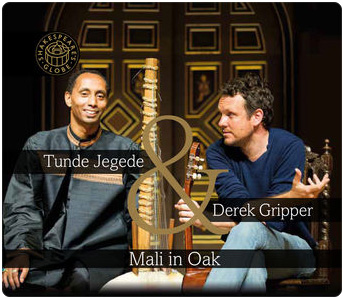 Two of the world’s most unclassifiable string players join the new Globe Music label to commemorate their sold-out performances in John Williams’ widely acclaimed 2014 and 2015 concert series at Shakespeare’s Globe. Jegede, a master kora player, cellist and composer of Nigerian and Irish decent brings his dynamic and cosmopolitan musical intelligence to bear on the heart of the Malian griot repertoire. South African guitarist Derek Gripper, who has been earning slack-jawed praise from Capetown to Carnegie Hall adapting music for the 21-string kora to the 6-string classical guitar, here records with a kora for the very first time.

A combination of duets and solos, both artists record some of their most personal compositions and arrangements in an expansive and loving journey of West African songcraft. Originally paired and programmed by Globe Director of Music Bill Barclay, Jegede and Gripper’s duet concert was the only performance in the John Williams series that the great guitar master, feeling he had nothing he could add, sat out to enjoy entirely as a listener.

‘ ...wholly enjoyable, quite outstanding, an entrancing sound, a kind of ecstatic tingling in the ear underlay almost everything that was played’ The Independent